Various Components Of Staircase And Details

Various Components Of Staircase And Details

Various Components of Staircase and their Details

Various Components or Parts of Staircase and their Details

Following are the various components of staircase:

The step is composed of the tread and riser.

The part of the stairway that is stepped on. It is constructed to the same specifications (thickness) as any other flooring. The tread “depth” is measured from the outer edge of the step to the vertical “riser” between steps. The “width” is measured from one side to the other.

The vertical portion between each tread on the stair. This may be missing for an “open” stair effect. 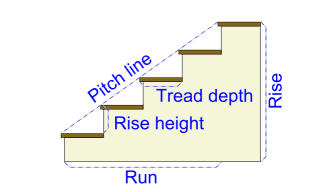 An edge part of the tread that protrudes over the riser beneath. If it is present, this means that, measured horizontally, the total “run” length of the stairs is not simply the sum of the tread lengths, as the treads actually overlap each other slightly.

Where stairs are open on one or both sides, the first step above the lower floor may be wider than the other steps and rounded. The balusters typically form a semicircle around the circumference of the rounded portion and the handrail has a horizontal spiral called a “volute” that supports the top of the balusters.
Besides the cosmetic appeal, starting steps allow the balusters to form a wider, more stable base for the end of the handrail.
Handrails that simply end at a post at the foot of the stairs can be less sturdy, even with a thick post. A double bullnose can be used when both sides of the stairs are open.

The structural member that supports the treads and risers. There are typically two stringers, one on either side of the stairs; though the treads may be supported many other ways. The stringers are sometimes notched so that the risers and treads fit into them.
Stringers on open-sided stairs are often open themselves so that the treads are visible from the side. Such stringers are called “cut” stringers. Stringers on a closed side of the stairs are closed, with the support for the treads routed into the stringer. 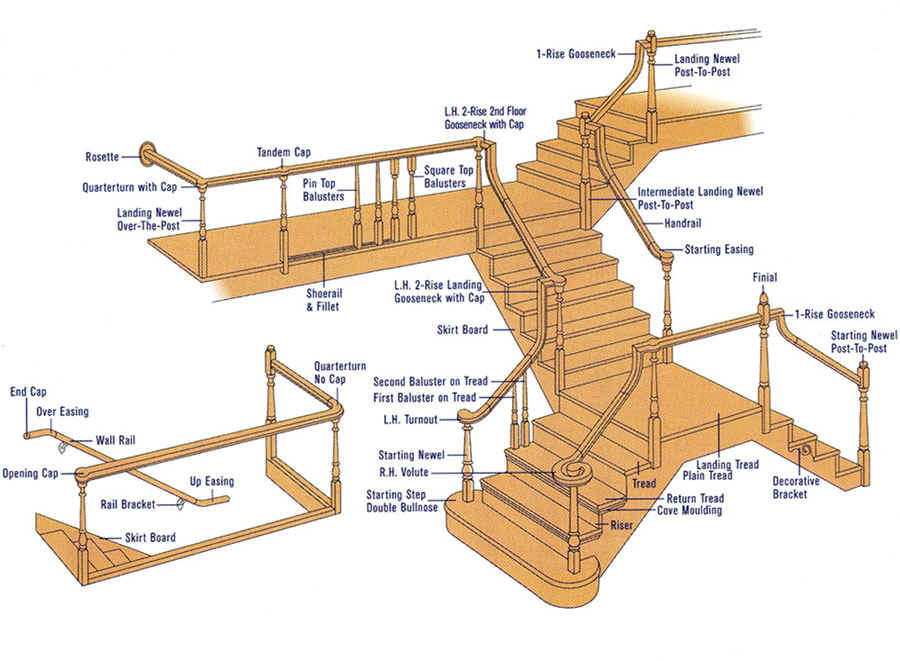 Winders are steps that are narrower on one side than the other. They are used to change the direction of the stairs without landings. A series of winders form a circular or spiral stairway. When three steps are used to turn a 90° corner, the middle step is called a kite winder as a kite-shaped quadrilateral.

Trim (e.g. quarter-round or baseboard trim) is normally applied where walls meet floors and often underneath treads to hide the reveal where the tread and riser meet. Shoe moulding may be used between where the lower floor and the first riser meet. Trimming a starting step is a special challenge as the last riser above the lower floor is rounded.
Flexible, plastic trim is available for this purpose, however wooden mouldings are still used and are either cut from a single piece of rounded wood, or bent with lamination Scotia is concave moulding that is underneath the nosing between the riser and the tread above it.

A handrail end element for the bull nose step that curves inward like a spiral. A volute is said to be right or left-handed depending on which side of the stairs the handrail is as one faces up the stairs.

Instead of a complete spiral volute, a turnout is a quarter-turn rounded end to the handrail.

The vertical handrail that joins a sloped handrail to a higher handrail on the balcony or landing is a gooseneck.

Where the handrail ends in the wall and a half-newel is not used, it may be trimmed by a rosette.

Wood handrails often have a metal core to provide extra strength and stiffness, especially when the rail has to curve against the grain of the wood. The archaic term for the metal core is “core rail”.

A term for the vertical posts that hold up the handrail. Sometimes simply called guards or spindles. Treads often require two balusters. The second baluster is closer to the riser and is taller than the first.
The extra height in the second baluster is typically in the middle between decorative elements on the baluster. That way the bottom decorative elements are aligned with the tread and the top elements are aligned with the railing angle.

A large baluster or post used to anchor the handrail. Since it is a structural element, it extends below the floor and subfloor to the bottom of the floor joists and is bolted right to the floor joist. A half-newel may be used where a railing ends in the wall.
Visually, it looks like half the newel is embedded in the wall. For open landings, a newel may extend below the landing for a decorative newel drop.

A decorative cap to the top of a newel post, particularly at the end of the balustrade.

Base Rail or Shoe Rail

For systems where the baluster does not start at the treads, they go to a base rail. This allows for identical balusters, avoiding the second baluster problem.

A decorative filler piece on the floor between balusters on a balcony railing.

Hi My name is Raja Junaid Iqbal and i am Land Surveyor by Profession but I've specialized in the field of Q,S and land development. As Professional Surveyor I engaged my self in all over the Gulf since 14 years.
@https://twitter.com/junaid_iqbal12
Previous Bar Bending Schedule For Slab And Estimation Of Steel Reinforcement In Slab
Next How To Find The Coordinates Of  Point P With The Help Of Point A & B